Endymion Dreams the Moon is a romantic meditation on obsession, beauty, and time. An ingenuous and comely youth falls under the hypnotic spell of a weird stranger who wants to worship him. Dream logic haunts their waking existences... if they're really awake, and who they say they are. Inspired by the Greek myth, the poem by John Keats, and some Lady Gaga thrown in for good measure, this poets' theater verse play has been done in Brooklyn, Toronto, and San Francisco, previously featuring performances from the DJ SPRKLBB, actor Matt Landry, Lonely Christopher himself, and writer Kevin Killian. This presentation celebrates the show's ten year anniversary and stars Stephen Ira as the Kid and Tony Torn as the Stranger. Written and directed by Lonely Christopher.

Lonely Christopher is the author of the poetry collections Death & Disaster Series and The Resignation, the short story collection The Mechanics of Homosexual Intercourse, and the novel THERE. His plays have been presented in Canada, China, and the United States. His film credits include several international shorts and the feature MOM, which he wrote and directed. His full-length play about the life of Hart Crane, Voyages, received a reading at La MaMa Galleria last year and his next book, In a January Would, is forthcoming spring 2020. Learn more at lonelychristopher.com.

Tony Torn is an actor and director based in New York. His more than 100 stage and screen credits include "Ubu" in Ubu Sings Ubu  (also adapted and co-directed), "Cyclops/Mother" in Suzan-Lori Parks' Venus at The Signature Theater, "Rusty Trawler" in Breakfast at Tiffany's on Broadway, and multiple shows with legendary experimental theater artists Richard Foreman and Reza Abdoh. He was a founding director of Reverend Billy and The Church of Stop Shopping. He manages Torn Page, a salon space and classroom in Chelsea dedicated to the artistic legacy of his parents, Rip Torn and Geraldine Page.

Stephen Ira is a writer and performer. His work has appeared or is forthcoming in FENCE, heART Online, Alien Mouth, Poetry, and other venues. He is a co-founder and co-editor of Vetch: A Magazine of Trans Poetry and Poetics. At What Happens: A Festival of Poets' Theatre, Ira originated the role of Jean Luc Godard in the debut production of Bernadette Mayer's play Famous People, and directed the short plays The Nicosia Sisters and The Wall-Sized Fish. He also appeared in Maxe Crandall's Underwater Wedding at Dixon Place and has performed his solo work at La Mama Etc. In 2013, he was a Lambda Literary Fellow. He studied poetry at the Iowa Writers' Workshop.

In the lounge at Dixon Place.

Free! The stage is steps away from the bar! One night only! 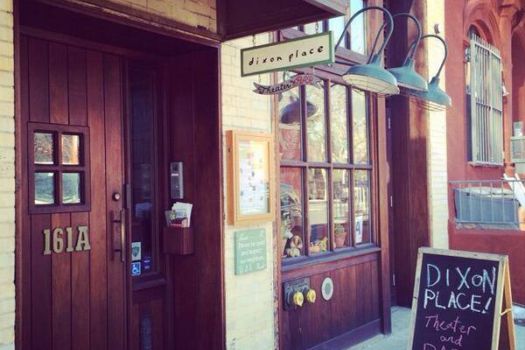 An artistic incubator since 1986, Dixon Place is a Bessie and Obie Award-winning non-profit institution committed to supporting the creative process by presenting...